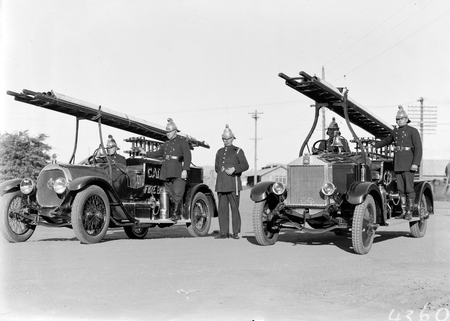 Canberra Fire Brigade with uniformed firemen and appliances, one on the right is an Albion.

The young man standing on the running board at the far right is my grandfather, Harold Stephenson (1896-1981). He lived at the Manuka Fire Station, where my father and his four siblings were raised. Harold had served with the Grenadier Guards in General Rawlinson's British Fourth Army, and was a veteran of the Somme as well as a German-English interpreter at the 1918 peace talks in Cologne. Harold had grown up in Egypt and was literate in German and Arabic as well as English. He migrated to Australia after the war and served as an ambulance driver and firefighter from the 1920's through to the 1950's, I believe.