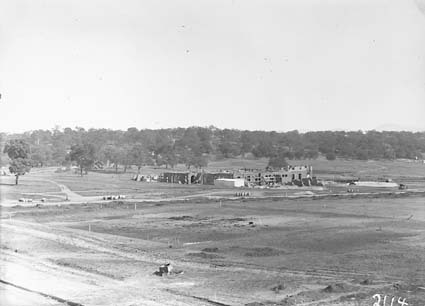 This photo is mis-identified - it is actually East or West Block under construction.
For East/West Block
- corner porticos
- flat across the front
- windows in threes, between porticos
- building has depth as well as breadth
- large tree in rear left also appears in other East/West Block photos
Against Boys Grammar
- school built in stages
- initial school 1928 building had no depth
- large construction, but no other completed stages
- missing bay window
- road on high side of buildings

This image has no tags yet. Help us out.