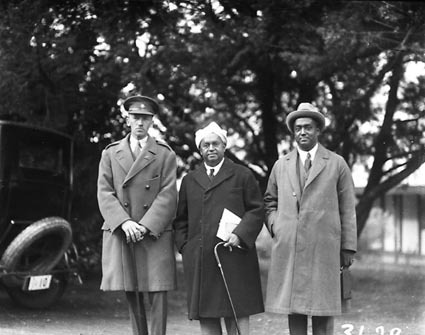 The gentleman in the middle appears to be Dewan Bahadur T. Rangachariar (ca. 1865-1945), former Deputy-President of the Indian Central Assembly, who represented the Government of India at the opening of Parliament House, Canberra, in May 1927. He can be identified via this newspaper photo - http://nla.gov.au/nla.news-article3852374 . The gentleman on the right might be one of the Dewan's two sons, who accompanied him - http://nla.gov.au/nla.news-article3859706 .

This image has no tags yet. Help us out.